A Century In The Making: Riding a hundred miles 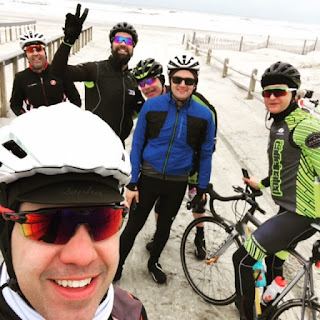 A CENTURY IN THE MAKING:
Riding a Hundred Miles


To all of my readers, I apologize for not posting a blog entry in awhile.  The Spring weather has officially arrived, which means business has been great at the Caffeinated Cyclist.  People are thinking about riding their bikes again, and getting them tuned up and ready for the season. New bikes are flying off the shelves, and new riders are excited to start pedaling them. The group rides are going on as well, so if you haven't made it out to one yet, please do so, it's always a good time!  The racing season has also started, so many of us have already pinned a few numbers on our jersey's in the past weeks. All this excitement has put the blog on the back burner, so let me bring you up to speed on a little road ride I did with a few friends to Ocean City New Jersey, and back.

The month of March had some interesting weather, so between the rain, snow, and warm temperatures, we really weren't sure if winter was coming or going. A couple guys had already done a century this year, which was awesome, so I wanted to do one as well before things got way too busy later in the year.  I hadn't ridden a century in almost two years, and normally I do at least one a year, so I was well overdue.  We all agreed on a date, and stuck to our guns, because this was happening rain or shine.  The night before, it was raining steady, so the roads were sure to be messy in the morning. Luckily I put a fresh set of Continental Gatorskin tires on my bike to keep me safe from punctures and made sure I wore some warm Castelli gear for the morning departure. 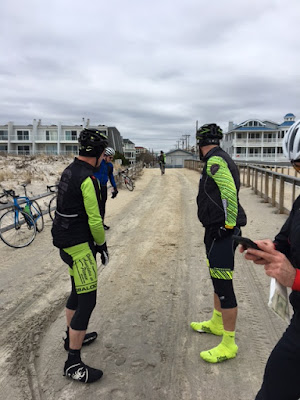 We pushed the departure time back a bit to let the roads dry up a little, and made sure we had everything we needed before the seven of us left the shop.  Normally for a ride like this, I bring more supplies than I need which usually consists of: two or three large water bottles; food for five hours; a large saddle bag with two tubes and inflation with a multi-tool; my phone and some cash. There is usually a couple of WAWA stops during the ride to refuel, but I like to be prepared in case I feel a bonk coming on, or if anyone else needs some energy.  With so many hours in the saddle ahead of us, you never know how the body will react to the mileage, so better to be safe than sorry.

The ride down was quick, averaging close to 20mph, mainly because we had a tailwind, even though we agreed to cruise down slowly(that never happened, we just hammered).  Along the way the conversations ranged from humorous, to completely immature as we pedaled our way to the shore noticing the smell of the marsh almost immediately as we approached the 34th street bridge.  As we approached the beach, cyclocross style, we stopped and looked at the picturesque views of the ocean and took a few photos before heading to the WAWA. 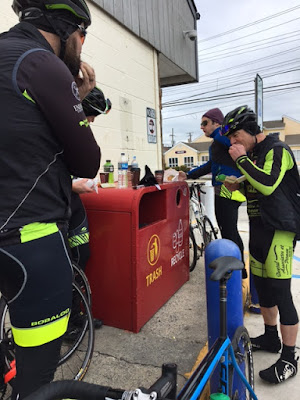 Since this was our first stop I opted for some hot coffee, hash browns, and a Snickers bar to top me off before we got moving again, saving the carbonated good stuff (a.k.a Coca-Cola) and chocolate chip cookie till the next stop.  After some meowing, and mild complaining about how miserable the ride back was going to be, we got back on our Cannondale bikes to start the ride back to the shop. It was a pretty quick stop, which I was totally fine with.  Quick stops tend to be better for the body, and you're less likely to tighten up from "lounging" too long so the quicker the stop, the better. Already having fifty miles in our legs, we left Ocean City with far less enthusiasm than we did when we left Pitman, hoping the return trip would go by fast. Going into the fourth hour on the bike, acouple guys began to suffer as we made our way into Buena for WAWA stop number two.

After stuffing our faces at WAWA, we couldn't help but notice how the wind had picked up, especially in the direction back to Pitman. I could finally feel my legs getting sore, which is right around the eighty mile mark for me in a century, so I gulped down my Gatorade like there was no tomorrow and made sure my bottles were full before we got rolling again.  Riding back on Tuckahoe  road seemed like an eternity as we took turns in a rotating pace line pedaling at 15 miles an hour into the head wind. The pressure from the pace, and the wind caused a couple of guys to get detached from the group but since we were a few miles from the bike path to Glassboro, there was no need to wait since we were getting close to the finish.

Once we made it back to Pitman, I couldn't help but notice we were shy a few miles of our one hundred mile journey!  This was probably the hardest part of the ride, since I was pretty much ready to get off my bike and collapse in the street, so now we had to make up 1.5 miles somewhere.  The four of us took a longer way back to make sure the computer read 100.0 miles, or else it didn't happen, and believe me every pedal stroke was agony. As I coasted to the bike shop doors, I threw my arms over the bars exhausted, replaying the days ride in my head and thinking when we would do it all again. 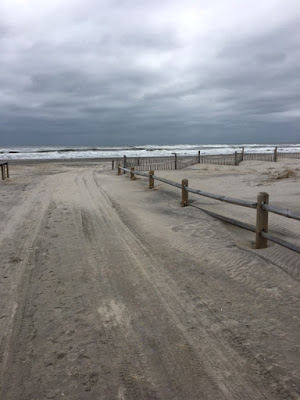 Posted by The Resident Road Nerd at 1:41 PM